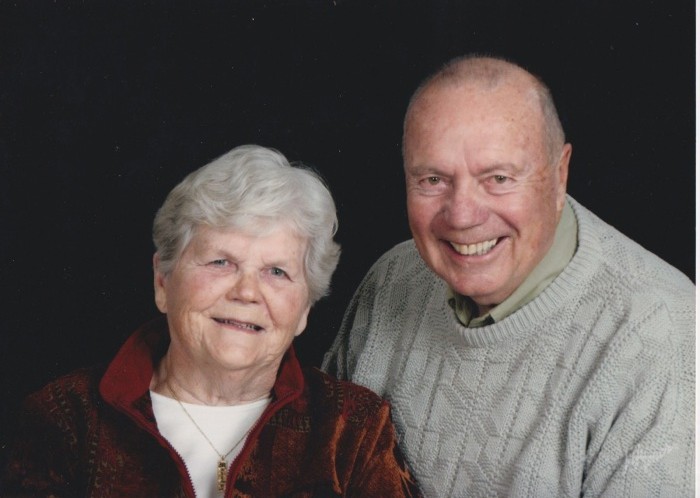 Robert Alan Piquette, 91, of Woodstock, passed away in his home on Wednesday, December 16, 2020 with his wife and children by his side. Rob was born in Waukegan, IL on October 19, 1929. He was the eldest child of Lionel “Mike” Piquette and Ruth (Hartmann) Piquette. Rob served in the United States Army in Germany from 1951-1953. He married the love of his life, Marion Barens, in 1951, and together they raised seven children.

As a teacher and principal in Woodstock for over 30 years, Rob knew the names of every student and parent and greeted his students daily at the school’s doors. He was a fastpitch softball player until the age of 61 and played bass in church and in numerous bands.

Rob spent a good portion of his life in Michigan’s Upper Peninsula, which he described as the most beautiful place on Earth. He loved picking wild thimbleberries and eating Marion’s homemade pasties. When he was not Up North, Rob could be found working on a project in his woodshop, practicing a tune on his harmonica, or planning his next hunting trip. He was a man of faith and attended Mass every week.

Rob was an avid reader, woodworker, hunter, musician, cribbage player, Packers fan, and the best husband, father, and friend in the world.

Rob is survived by his wife, Marion; his brothers, Jay and Jim; his children, Cheryl, Mike, Jed, Tito, Nicholas, Terry, and Laurie; numerous grandchildren; and great-grandchildren. He loved them all.

Marion Piquette, 92, of Woodstock, IL, passed away peacefully surrounded by her children in her home on Tuesday, July 20, 2021.

Marion, “Manny” was born May 17, 1929, in Barton, Wisconsin (now West Bend).  She was the youngest child of Leona (Benn) Barens and Elmer “Sam” Barens.  Marion grew up in Gurnee, IL where she met the love of her life, Robert, and they married on June 30, 1951. Together, the couple raised seven children.

Generally mild mannered, Marion was a hidden pistol, known to fire off a priceless zinger that cut to the chase. She was “the baby whisperer” and flourished in her role as mother, grandmother, and great-grandmother.  The beloved matriarch of her large family, Marion was her childrens’ secret keeper and confidant.  When not doing laundry for nine people, she spent much of her child-raising years in the kitchen preparing feasts fit for royalty. Marion had a beautiful singing voice and a heart of gold.

A voracious reader, books provided Marion a way to “hear” conversation after she lost her hearing. She embodied dignity and grace while also enduring Parkinson’s Disease for over 20 years, never complaining.

She was a beacon of love and stability, and comfort... quiet in her ways, yet so powerful in her presence.

After raising their brood, Marion and Rob traveled the country with friends and family. They visited all fifty states and relished every moment. They wintered in Hawaii many times.  Truly a team, their journey was full of love, and they almost made it to their 70th anniversary.

Marion is preceded in death by her beloved husband Robert, brother Gerald Barens, and sister Joan Schrieber. She is survived by her children: Cheryl, Mike, Jed, Tito, Nick, Terry, and Laurie, and numerous grandchildren and great-grandchildren. Though she will be missed tremendously, she is finally free.

A joint Memorial Mass of Christian Burial will be held at 10:30am on Thursday, July 29, 2021 in St. Mary Catholic Church, 312 Lincoln Avenue, Woodstock, IL 60098 with Fr. Burt Absalon officiating. Burial in Calvary Cemetery, Woodstock. In lieu of flowers, please donate to the charity of your choice. Rob and Marion donated throughout their lives to the Parkinson’s Foundation, Food for the Poor, Wounded Warriors, St. Mary’s Church, and others.

To send flowers to the family or plant a tree in memory of Robert & Marion Piquette, please visit our floral store.