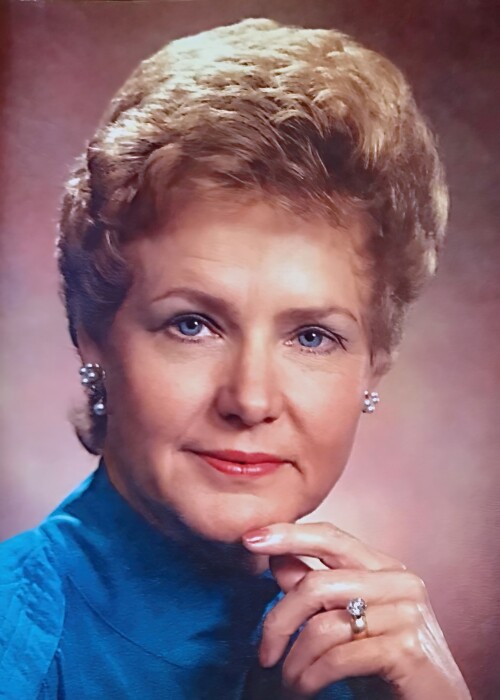 On September 12, 2021, Lodema Joy (Housman) Kittle, loving wife and mother of three boys, passed away peacefully in her sleep at the age of 87. Deenie was born in Hayes County, Nebraska on September 6, 1934 to Grace (Mosely) and James Housman. She had a wonderful childhood growing up on the family farm and enjoyed telling stories of her life on the farm and their struggles combined with the joy found in a close family.  One day, her brother Bert brought home his best friend with whom he was taking flying lessons, Bernie Kittle. He instantly fell in love with Deenie and on December 23, 1950, they were married and shared nearly 66 wonderful years together. She was a devoted mother while raising three boys who were her pride and joy.
Deenie and Bernie were world travelers and enjoyed many adventures traveling throughout the US, Europe, and Asia. They also loved spending time at their second home in Eagle Vail, Colorado where they hosted many family vacations. She loved to play golf, bridge, was an avid reader, gardener, and was an expert seamstress. She used her talents to sew many costumes for her granddaughters’ theatrical performances. Deenie was always known for her kindness and generosity. She was a prayerful woman and a regular attender at First Free Church where she was active in the Berean Sunday School Class and served as a Deaconess.
Deenie is survived by her children, Douglas (Barbara) Kittle of Kokomo, Indiana, Daniel (Vicky) Kittle of Scottsdale, Arizona, Randall (Gini) Kittle of Rockford, Illinois; her grandchildren, Nick (LeeAnn) Kittle of Aurora, Colorado, Cassandra (Matthew) Ray of Chicago, IL, Milea (Matthew) Kammer of Tampa, Florida, Brittany (Nick) Clore of Meridian, Idaho, Anna (Paul) Benson of Rockford, Illinois, Rachel (Jaron) Benson of Rockford, Illinois and Benjamin Kittle of Rockford, Illinois; her great-grandchildren, Alyssia, Kai, Miles, Marlowe, Cypress, Everest, Vivienne, Garnett, Wilbur, Jonas, Elinor, and Peter; and her sister, Mary Sivits.
Deenie was preceded in death by her husband Bernie; and her siblings, Dick Housman, Bert Housman; two infant grandchildren, Randall Jr. and Ashley; and one great-grandchild, Dominick Ray.
The family would like to thank the kind staff at Lincolnshire Place and Transitions Hospice for all their care and support.
A private family burial will take place in Scandinavian Cemetery at a later date. In lieu of flowers, memorial donations can be sent in Deenie’s name to First Evangelical Free Church, 2223 S. Mulford Road, Rockford, IL 61114.

To send flowers to the family or plant a tree in memory of Lodema "Deenie", please visit our floral store.

A Memorial Tree was planted for Lodema "Deenie"