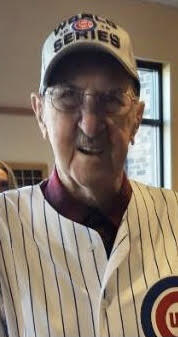 Harold Sturtz Ward, Jr., 94, of Rockford, passed away peacefully at home with his family by his side on Thursday, December 31, 2020.  Born in Chicago, IL on November 28, 1926 to Harold S. and Francis (Kalchbrenner) Ward.  He married Betty Lou Callahan in 1948 and after 35 years she predeceased him in 1983.  Married Loretta Schwanebeck in 2001 after a lengthy courtship.

Harold worked for 40 years at Elco Industries where he was known as "Honest Harold".  He was a die-hard Bears and Cubs fan.  He enjoyed collecting valuable things like eagles, umbrellas and coffee cups.  He and Loretta enjoyed traveling to Florida most years with their church family and also to Europe several times as well as Aruba.  He was active in his church, Redeemer Lutheran.

A private family service will be held at the church.  Due to Covid restrictions, a Celebration of Life will be held at a later date.  Any memorials may be given in his name to Redeemer Radio Mission, c/o Redeemer Lutheran Church, 827 - 16th Street, Rockford, IL 61104.

To send flowers to the family or plant a tree in memory of Harold S. Ward, Jr., please visit our floral store.

Celebration of Life to be held at a later date