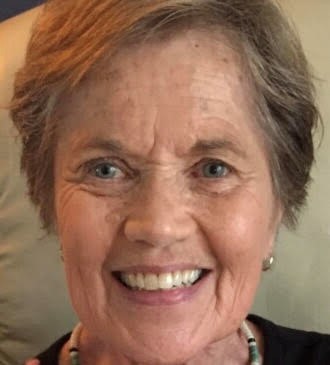 Gloria Jean Svanda died early in the morning on Friday, June 4, 2021, aged 70. She was at home, her sanctuary. Private gatherings to celebrate her will follow later this summer, in Rockford, IL and in Marquette, MI.

Gloria was a farm girl in her heart, raised on the farm where her parents grew sweet corn for DelMonte. She fondly recalls work days at harvest time to shuck, cut, blanche, and freeze surplus corn. The land seemed 'right' when it was productive, as in the farms of the Midwest. She believed in making your own little corner as wonderful as it could be, and lived that through her avid gardening and planting trees, or maybe even by tearing out a garden when the grandkids just need a sandpit!

Gloria was married to David Svanda for 16 years, and had a daughter Tracy. They lived a time in New York state, and then settled in Marquette, Michigan. It mattered to them to work for the good of their community, from Gloria's role in early childhood education, to David's in city government. She was a natural homemaker, with a knack for creating welcoming and workable spaces. Her kitchen churned out huge trays of holiday cookies for all who worked at City Hall; her table saw countless projects prepared for preschool kids by a teacher's capable hands. She made home a nurturing place for her family, and fostered in her daughter a deep sense of belonging. She eventually returned to her childhood home, northern Illinois, and has lived in Rockford until the present day.

Gloria knew from a young age she had a talent in working with kids, and earned a Bachelor's in Early Child Development from Western Illinois University. Her career included the Marquette Cooperative Preschool, after school programming, and the Discovery Center Children's Museum in Rockford. She was a respected guide to parents of a whole generation of kids coming through 'The Co-op' in Marquette, and made friendships there that stuck for her whole life. At the Discovery Center, she got into messy science education - the perfect preparation for her curious grandkids. Gramma Gloria and Herman spent hours experimenting with cornstarch and water, maybe baking soda and vinegar, 'seeing what happens'. The way she could connect with kids was truly rare. Her mind saw the world, or a moment, through a child's eyes. She was always ready to play!

Her greatest fulfillment was having grandkids, and seeing her house turn from 'Gloria's house' to 'Gramma's house'. Her cherished Herman and Liona adored being silly with Gramma Gloria, and they could feel that she would rather play with them than do anything else in the world.

Doing site supervision for after school programs brought her into the lives of kids who sometimes had a rougher time. She kept the daily chaos (up to 100 elementary kids!) on track with her high expectations. She was proud that on field trips, the people they visited would comment on her kids' good manners. When there was conflict, she would find accountability by asking the kids to 'back up, back up' to the start of the problem. Her staff of group leaders remember her for baking a homemade treat for each of their birthdays, every year. She retired having affected the lives of so many kids.

Too often, her health stood in the way of what she would have liked to do and give. She weathered Wegener's disease (a rare autoimmune condition) with all of its complications, brave every time to fight the attacks on her body, and move through recovery to a 'new normal'. The transplanted kidney she received from her brother Dan stayed strong her whole life. Fibromyalgia frustrated her by stealing away energy. It was ultimately colon cancer that took the last of her fight.

Gloria grew up in the Monroe Center Union Church, where her parents served as pillars. She took her own turn in service at Grace United Methodist Church in Marquette, giving generously both in the church machinery and as a trusted friend to all, from college students to the most elderly of the congregation. She feels respect for all faiths and has in more recent years drawn comfort from Native American beliefs about the spirits held within the Earth. "I believe we have a deity that creates spirits that come to us to help us, whether it's for strength, or perspective. Like the spirit of peace. I think spirits are open and don't lock into a form. The presence of the spirits and the way I believe in them gives me peace."

Her steadfast sister Sue describes a 'well spring of determination'. Gloria knew how to get things done, and especially when it took some problem solving and creative thinking. When she did ask for help, Gloria went above and beyond to show appreciation. She will be missed.

Anyone wishing to make a gift in her name is encouraged to choose an organization that honors what she cared about, or reflects a personal experience with Gloria.

To send flowers to the family or plant a tree in memory of Gloria Jean Svanda, please visit our floral store.

You can still show your support by sending flowers directly to the family, or by planting a memorial tree in the memory of Gloria Jean Svanda