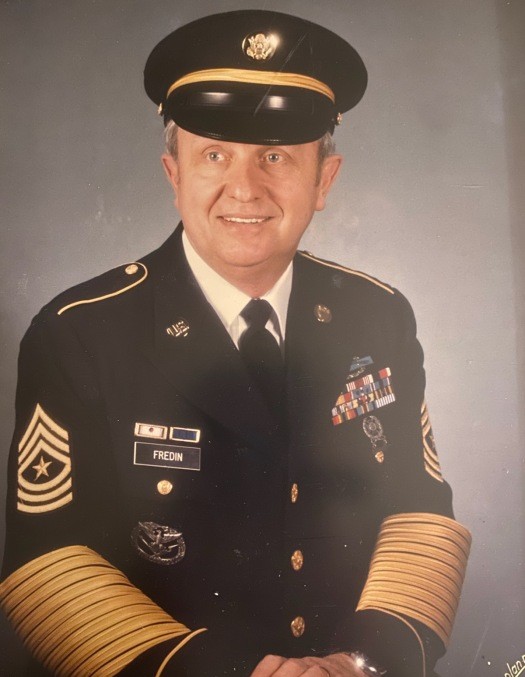 George R. Fredin passed away at Eastbank Rehab Center on Saturday, January 1, 2022, at the age of 89. George was born in Rockford, Illinois on February 24, 1932, to Thor Fredin and Elsa Lilja. He graduated from East High School. He went on to join the U.S. Army in 1948 where he worked his way up the ranks to a Command Sergeant Major. He received numerous awards, honors and medals during the time he served. He was even awarded a Bronze Star from the Korean Government. After serving in the military for over 43 years, George became an Illinois State Trooper stationed out of Pecatonica and continued with them until he retired.

In 1953 George married Mary Frisella. They were blessed with three daughters and enjoyed a happy life together. Mary passed away in 1979. A few years later, George met Shirley Kemnetz and they married.

George was a member of the VFW, American Legion and Korean War Vet Association as well as the Veterans of Underage Military Service. He was an amazing gardener and was well known for his “legendary” garlic and tomatoes. He was also an avid fisherman. In 1994 he was presented with a Top Amateur Fisherman award.

The Funeral Service will be held at Honquest Family Funeral Home with Crematory, 11342 Main St. Roscoe, IL. on Thursday, January 6, 2022, at 5:30 pm. A visitation will be held from 3:00 pm until the time of service. A celebration of life will follow the service at 6:30 pm at the Roscoe VFW.

To send flowers to the family or plant a tree in memory of George R. Fredin, please visit our floral store.