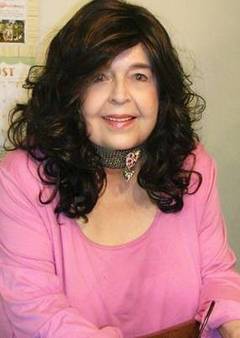 Deston Lee Lee left the bounds of this earth to join the heavenly chorus as First Soprano on February 5, 2014. She loved the Lord, God and Jesus Christ and spoke to them constantly. She suffered from congestive heart failure and now she can be with her adored mother and her 4-legged walking buddy, Mandy.

Deston loved singing and acting and was very active in Community Theater in Lynchburg, Virginia, and in Rockford where she performed for Starlight.  She was the best actress her husband had ever seen, as she did not act a role, but rather became that character. She also had the most beautiful singing voice he had ever heard in person.

After embracing the Church of Jesus Christ of Latter Day Saints, she came upon the likeness of deployed Missionary William J. Lee and was smitten, as he was with her upon his return. A more lively, lovely apparition he had not seen and after a short engagement they married in the Washington, DC temple in 1981. Deston worked at Barber Coleman. Bill later  joined the USAF, where he was deployed to England, Colorado, and finally Fort Drum NY. While in England, Deston formed the Upper Heyford Choraliers, where they toured locally and even performed at the Cadbury Theater in Birmingham and the Sheldonian Theater in Oxford. While Deston acted, husband Bill directed “Guys and Dolls”, “Frankenstein” and “Arsenic and Old Lace”.  Through their joint efforts, RAF Upper Heyford was awarded the Ambassador’s Award for “Enhancing Anglo American Relations”.  Fascinated with the Plantagenets, she was a member of the Richard the Third Society and wrote a novel, “Beth, White Rose of York.”

Deston always wanted to be part of her deployed husband, and arranged to have pallets of vegetable seeds sent to those in Haiti, and gathered dog collars to help the abandoned canines in Bosnia. While living in Rockton, IL she researched the life of Stephen Mack and Hononegah and wrote an amazing outdoor pageant about their life that was performed on the historic grounds of the Mack House. Deston was a friend to all who would accept her friendship and always tried to do what was right. She will be sorely missed by friends and there is an empty place in the heart of her beloved Bill. Rare is the event that one has been privileged to be close to greatness, and for that he is forever humbled and grateful.  No woman was more loving and loyal. May we meet and continue when the time is upon us.  Thank you for being my companion for more than 30 years, my love.

Visitation from 9:30am to 11:00am on Saturday, February 8, 2014 in the Church of Jesus Christ of  LDS, North Alpine and Rural, Rockford, with the funeral service at 11:00am.  Honquest Family Funeral Home with Crematory is honored to have assisted the family.  To share a memory or condolence, visit honquestfh.com.