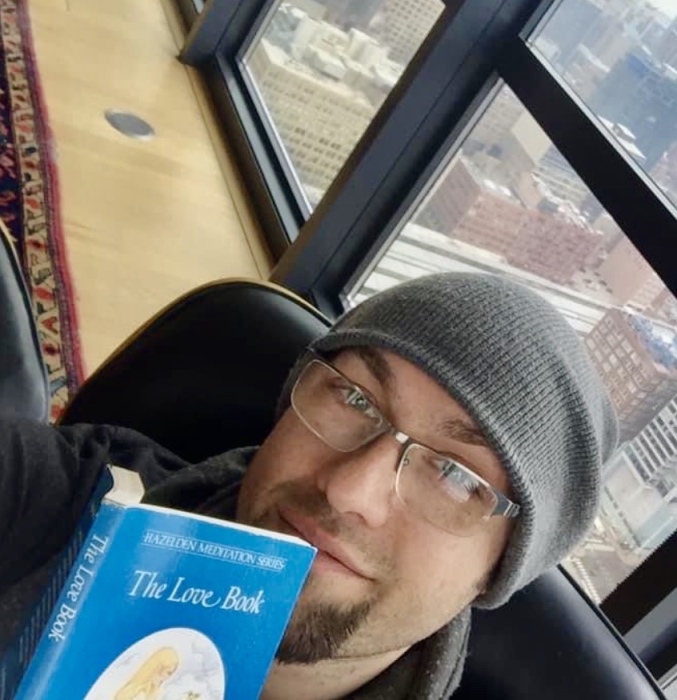 There are people in this world that seem to fly on wings enabling them the travel through life connecting with people a little deeper than the average person. You know these beautiful souls the minute you meet them. They are vibrant, exciting, make you laugh sometimes hysterically. Sometimes living a little too close to the edge but that is what makes them special. A smile you never forget. My son, Brandon Danger, is one of those beautiful souls. Not perfect by any means, but he had a smile that you never forget and a heart of gold. He was a person who had the good fortune to travel to many places in this world. Everywhere he went he made people laugh and feel loved. Even at a young age he could have the room rolling on the floor. He was a guitarist and songwriter and worked in the music industry for many years. Along the way he made friends with people everywhere he went. It didn’t matter to him what you were into or how you lived your life, everyone who met him experienced a special bond and what I hear most from others is that they “Fell in Love” with Brandon. This is just a small glimpse of his story.

October 28, 1987 in Chicago, Wendy (Wolfe) Danger gave birth to a little boy.  Brandon joined his sister Andrea and they were of course lifelong buddies. Ever protective of her brother, a bond was created that will, like all sibling bonds, last a lifetime. Unfortunately for Andrea, she was a sister to a brother that had unbounding energy and sometimes I think he ran her ragged growing up. One thing that was never in doubt in anyone’s mind including Brandon’s, is that he had a sister who loved him unconditionally and who would never, ever give up on him. She was always his biggest fan.

One of his favorite pastimes from an early age was fishing. He loved to go fishing and it was a joy that we experienced several times this past year. I am grateful for those times that we had together over his lifetime. Another love was music. Brandon got his first guitar when he was 10. He had an ability of his own to learn but eventually he took music lessons with guitar virtuoso Benjamin Newell/aka Pistol Pete and the artist in him bloomed. At the age of eleven, Brandon joined his Dad who was working for Cheap Trick, on a tour for about two weeks. Tom Petersson from Cheap Trick “Fell in Love” with Brandon and I will never forget when we were in New Orleans doing a show at the House of Blues. My hotel phone rang at 8AM and it was Tom asking if Brandon could go walk the city with him.  When they returned, Tom had bought him a new wardrobe. That was when Brandon decided that he wanted to be around music for a living. That is an act of kindness that I will never forget. From there Brandon grew his talent and as a teenager joined the Brett Vogel band as a bass player, playing the 12 string bass guitar (invented by Tom Petersson). The highlight was when they released their CD and were able to open for Collective Soul in Milwaukee. Unfortunately, it was at this time period that a friend encouraged him to try heroin for the first time.

Brandon looked up to his Dad’s friend Trace Foster, a phenomenal guitarist and guitar technician to some of the biggest artists in the music industry. As soon as he was able, Brandon started working for local Chicago bands and grew his craft, touring with Simplified, the Poptart Monkeys, Saving Abel, Sevendust, Non Point, Saxon and many others. Along the way he connected with people, leaving an impression in their hearts and minds. I would meet these musicians and the first thing out of their mouths was, “Oh, we absolutely love your son.” Always ready for a good time, he would jump at every opportunity to go fishing, rock climbing, jumping out of airplanes, racing cars or getting a new tattoo.  Want to do, this or that? He was all in and would have you in stitches along the way.

Another love that Brandon had was a love of good food. Sushi was an absolute favorite. One of our favorite family food nights when he and his sister were teenagers was Dad's Sushi Roulette. I would make a huge plate of sushi and hidden among the many pieces of fish would be a few pieces with extra wasabi. We would eat our sushi and when one of us would get a piece with all of that wasabi, our eyes would water and we would laugh hysterically.  As he got older a favorite pastime as we both traveled was the search for the “Perfect Bite” along with a photo sent between us. At the top of the list? The Rockford Roll from Shogun in Rockford.

While on tour with Sevendust in Charlotte, NC, Brandon met Jennifer Cordell and set roots in Gastonia, NC. On December 8, 2010 they welcomed their son, Blaze Allistair Danger. Yes, as if having Danger as a last name wasn’t cool enough, he gave his son the initials BAD. (Lol) Over the moon is the only way to describe how he felt about this little guy. His little Blazey he would call him. I have never seen a more gentle father than my son. His son has special needs and is mostly nonverbal but like his daddy he has a smile that will melt your heart and Brandon loved him more than life itself. Despite all that his insidious addiction threw at him and at times the very dark days that presented themselves, he always cherished his little boy and eventually stopped touring to be home with him full time. The love that my son had and expressed through his gentle touch and handling of his son was a lesson that benefited me and warms my heart.

When Brandon entered rehab in November of 2019, his primary dream was to get well so that he could get his family back. He was able to have Blaze come out to stay with us in the summer and we all shared a wonderful time together with joyous laughter and family time unhindered by the poisonous and insidious evil of addiction. It is a time that our entire family will never ever forget and will cherish in our hearts.

Brandon was in Rosecrance recovery facility in November and December of 2019 before moving to a sober living location in Chicago. While there he would volunteer to talk with groups of men between the age of 17 and 27. Although in his 30’s, he had a youthfulness that allowed him to reach the hearts of younger people and a wise soul that drew him close to people much older. He was so happy to share his story and wanted so badly to help others. A person recently shared that there were and are people whose lives were changed from talking to my son. He was able to share with them that he was just a normal person like them. A dreamer, a lover of life who was once lost but was now focused on getting better. Some young men decided to stay in the program because of Brandon and his willingness to share his experience with them. For Christmas, Brandon was asked, because of his music ability, to put on a Christmas program for the patients and staff at Rosecrance. He played Christmas songs in his own special way and left the room speechless and glorified.

Sadly, On Thursday, October 1, 2020, my dear son, flying on wings made of wax, flew too close to the sun, and tumbled to the earth, breaking the hearts of everyone that ever knew him and breaking the hold that heroin had over him.

He was a wonderful, amazing young man who did not want to be addicted. In his last year he experienced life with a sober perspective and did not intend to leave the family that he was working so hard to draw closer to. He was a beautiful person who had an insidious evil introduced to him that spares very few who allow it in. We are forever grateful to those who have shared stories of how beautiful and loving our Brandon was and how he helped them. This shows us that despite this evil that was always with him, he was able to conquer it with love and not let it stop him from being the kind soul that he was naturally.  He showed that love conquers evil. Brandon once said something that shows his view of things that we can all benefit to remember. He told his sister and I, “With every awful heart-breaking thing that happens in this world, a million little seeds of possible fall.”

There are so many who have expressed a desire to join in with a memorial for Brandon. We are going to have a private ceremony first and then we would like to announce a date and location for those who wish to join us in an encouraging fellowship to share stories and remember Brandon. However, because of COVID restrictions in the state of Illinois at this time, we are finding the effort to do so overwhelming. We will arrange for a memorial for Brandon as soon as possible. In the meantime, please follow our family's posts on Facebook as we share his music and personality.

Many have said, “If there is anything we can do….”, and we love you for this. Therefore, we would like to ask you to help us continue Brandon’s “Love Triumphs Over Evil” by helping others.  There is a group of wonderful people in the community where we live called Miss Carly’s. They are helping the addicted and helpless every day. They survive solely on private donations.  What you can do to help us is donate in the amount that you are able according to your ability by clicking the Donations tab at the top of this page. We will then take in a check for the total amount with our additional donation and present it in Brandon’s honor from all of the friends and family that loved him. If you are more comfortable donating directly on Miss Carly’s website, please feel free to do so and please mention that this is in honor of Brandon Danger in the comment section.  www.misscarlys.org

Love Triumphs Over Evil.  When you feel a bit down or blue, think of someone who you think might need a lift in their day and tell them that you love them. Showing love toward others has a mental and physical benefit to the giver and receiver and is the only way that we stop this evil.

We Love You All.

To send flowers to the family or plant a tree in memory of Brandon Jay Danger, please visit our floral store.