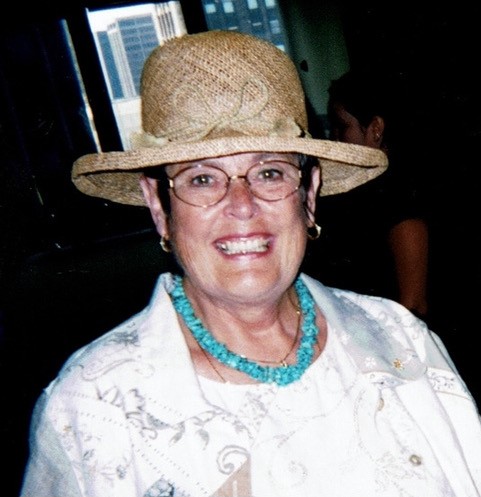 On July 26, 2021, Beverley Lois Bartlett died after a short illness in Rockford, IL. She was 84. She was known for her generosity, her beaming pride in her children and grandchildren, her world-class comforting hugs, her listening ear, and her sage counsel. She was an outgoing, competitive, smart, independent-minded woman, who often operated on “Jones time,” caught up in the serendipitous discovery of an estate sale or finishing a good book.

Beverley was born on January 5, 1937, in Moose Jaw, Saskatchewan, oldest daughter of Lionel and Gladys (Herring) Jones, following two older brothers, Bill and Bob, and followed by two younger sisters, Patti and Linda. Her childhood on the plains of Saskatchewan was the origin of her love of barns and taking the hidden, scenic backroads. “Take a mental picture” was her frequent refrain, encouraging her children and grandchildren to hold close sweet and picturesque childhood memories.

Nicknamed “Betty Lou,” she graduated from Moose Jaw’s Central or CCI (Central Collegiate Institute) in 1954. She was remembered as a good basketball player and boasted years later about being on the district champion “Basketbabes” Senior Girls basketball team.

Following high school, she worked briefly at a bank before switching gears and graduating in 1958 from the School of Medical Laboratory Technologists at Moose Jaw Providence Hospital, receiving recognition for her top-of-the-class marks. Being a lab tech remained an essential part of her identity even years later, as she capably nurtured her offspring through the inevitable bumps and bruises of childhood.

Beverley had an intrepid adventurous side. She recounted the time in her early 20's when she had to make a fateful choice between buying a 1958 MG (in British racing-car green -- her favorite color), or hitchhiking around Europe. The travel won that time, although she always did love a fast and jaunty car, and seldom turned down a stoplight challenge.

In April 1961, she sailed from Montreal aboard the S.S. Homeric, heading to Europe with girlfriends Margaret and Patricia. Her children grew up hearing stories and seeing slide shows from this trip -- three young Canadian gals seeing the sights of Europe, sleeping on the beach in Gibraltar, staying in no-star youth hostels and pensions, meeting other adventurers from around the world, becoming trim and tan from all the walking (she liked to tell us she was “down at the heel” as her high heels eventually became flats), finding bargains in the markets and sending treasures back home, fending off would-be suitors, and always carrying or dragging “Baby,” the giant suitcase that held their gear and a growing haul of souvenirs.

While traveling through West Germany, she rang up a former sweetheart, David Bartlett, who was stationed there with the Canadian military. They married on December 16, 1961, in Germany. Eldest son Bradley was born in Germany; number two son Daniel was born in Moose Jaw, only daughter Libbey was born in Ann Arbor, MI, and Michael was born in Crystal Lake, IL. David left the military and joined United Airlines as a pilot, flying out of Chicago’s O’Hare Airport.

In 1972, Beverley and David made their permanent home with their children in the small town of Roscoe, IL, in a historic house that was originally built as a stagecoach stop in 1837. The house sat on seventeen forested, hilly acres with the spring-fed Kinnikinnick Creek running through the property.

Beverley kept her sense of adventure and wonder throughout her life, finding joy in travel, exploration and wandering, and always meeting new as well as old friends along the way. Another constant was her generosity -- she’d give you the ring off her finger, and often did. Her ability to connect with others was remarkable – with her smiles and kind greetings, she could strike up enduring friendships in just a few minutes. “You catch more flies with honey,” she’d say, and proved it time and again. From bridge club and Macktown golf course, to her lifelong interest in finding antique treasures and selling them at The Nest Egg and antique malls, she made many dear friends wherever she went. After her move from Burr Oak Road to Wesley Willows, she often remarked how happy she was to be meeting so many new, interesting people – friends who helped make the last years of her life so special.

Memorial donations can be made to the American Cancer Society or the charity of your choice.

To send flowers to the family or plant a tree in memory of Beverley Lois Bartlett, please visit our floral store.

A Memorial Tree was planted for Beverley