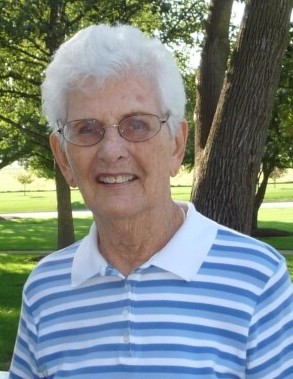 Barbara K. Severson, nee Teske, died on January 4, 2022. Barbara was born in Duluth, Minnesota in 1922, the daughter of George and Martha Teske.

One of Barb’s favorite childhood memories was ice skating at Chester Bowl Park in Duluth. This was not figure skating but speed skating.  She called her ice skates “old tinhorns.”  She remembered fondly a skating outfit her mother made her from a man’s old topcoat:  it was a pair of snow pants and an “Eisenhower jacket.”

Barb lived her childhood during the depression when she learned to waste nothing. She recalled the opportunity to go to a movie theater when you could enter to see the movie not by paying with cash but by bringing food for the needy. Barb walked to the theater in the winter with a head of cabbage as her entrance fee only to discover upon arrival that the head of cabbage had frozen solid on her way.

Barbara met Selmer (Sam) G. Severson in Duluth in 1944 when he had “leave” from his merchant marine duties on the Great Lakes. Barb & Sam married in Toledo, OH in 1945. They spent their first winter together in Buffalo, NY “keeping ship” on board one of the ships that Sam sailed during his merchant marine career. Then, after living in Minnesota for the first seven years of their married life, they moved to Rockford, IL in 1952,

Barb & Sam had been active members of the Lutheran Church of the Good Shepherd in Rockford since 1952.  Barb & Sam were charter members of Northern Illinois Botanical Society at the Klehm Arboretum in Rockford, Illinois where they participated in many hours of volunteer work.  When Sam retired from Swift & Co. in 1979, Barb was determined not to be a “golf widow.” She took up the game of golf, playing on leagues at Ingersoll and Sandy Hollow courses each summer as well as golfing with family and friends.  She excelled at the game! Barb was at her best as a wife, mother and homemaker.  She loved gardening, was an accomplished seamstress, enthusiastic square dancer with the JABOS, fervent exercise devotee, ready traveler, outstanding hostess to family and friends, superior pie maker and avid Chicago Cubs fan.

After Sam died in 2007, Barb remained in their Safford Road home of 51 years. Then in September 2010 Barb made the decision to move to Wesley Willows in Rockford where she resided until her death.

There is no service that could honor our dear mother more than our collective, abundant and sweet memories do so honor her. No service is planned at this time.

To send flowers to the family or plant a tree in memory of Barbara Kathryn Severson, please visit our floral store.

You can still show your support by sending flowers directly to the family, or by planting a memorial tree in the memory of Barbara Kathryn Severson