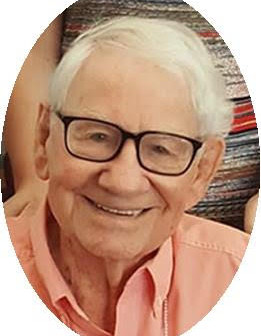 Wallace A.  (Wally) Hanson, 96, passed away at Wesley Willows in Rockford on May 4, 2021.  Born on August 16, 1924 in Hortonville, WI to Wallie and Ceil (Lochschmidt) Hanson, he graduated from Hortonville High School in 1942, then served 42 months in the US Army Signal Corps.  He saw foreign duty in the China-Burma-India theater, where he was assigned as a radio operator to the US military mission in Yenan, China – the wartime capital of Mao Tse-tung.  His story of ‘Wisconsin farm-boy meets world-historical figure’ has been memorialized in oral history recordings as well as the local press.

After the war, he attended Murray State University where he earned two degrees and most notably met the love of his life, Martha Sue Cunningham.  Married in 1948, Wally and Sue enjoyed 68 years of marriage until Sue’s death in 2016.  Wally’s educational career spanned 30 years.  He began as a classroom teacher and coach in the central Illinois school districts of Sidell and Westville.  In 1961, the family (now including two young boys, Mark and Greg) moved to Roscoe where Wally served as Superintendent until 1980.  During his tenure the district prospered, adding two schools.   He then pursued a short but rewarding career as director and officer for the 1st Bank of Roscoe, enjoying another retirement party after a 10-year stint.

As part of the Greatest Generation, Wally faithfully served his country and community; he was devoted to wife, family, and friends.  He was preceded in death by his beloved wife Sue and his son, Gregory; brothers Wesley and Harold; and sister Phyliss.

He is survived by his son Mark (Karen), of Richmond Texas; his grandchildren, Caroline of Katy, TX; Matthew (Lori) of Temple, TX; great-grandchildren, Luke and Carli Jean of Temple, TX; brother Norman “Dub” of Wisconsin Rapids, WI and sister Audrey Elkins of Port Neches, TX as well as nieces, nephews, and friends.

To send flowers to the family or plant a tree in memory of Wallace A. Hanson, please visit our floral store.