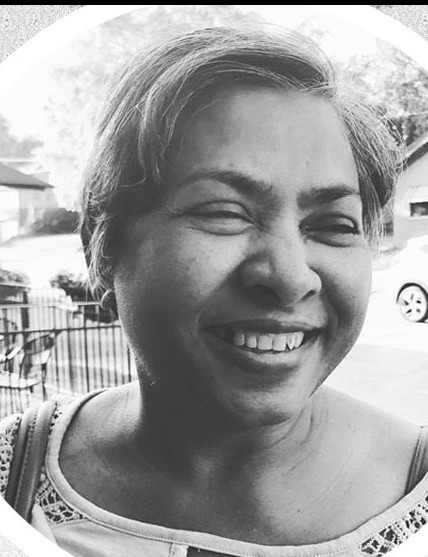 Thatapudi Tharani Kumari was born in Hyderabad, India on July 13, 1962 to proud parents, Thalluri Periah Jayapaul and Elizabeth Duppati. Her parents were teachers. Her father taught Social Studies and her mother taught Math and Science, both at government schools. Tharani lost her mother at a very young age on December 5, 1978. Her father passed on February 3, 2010. She was very close to both and missed her mother dearly throughout her life. She had three siblings:  oldest sister Talluri Lydia Sandhya Rani, older brother Talluri Jayapaul Solomon Kamalakar and younger sister, Tallari Mamatha (Durgam).

She went to school and church in Hyderabad until 1971 when her family moved to Secunderabad. She attended a Baptist church in the city. During this time, she attended Wesley Jr College and then went on to the P.E. College of Education where she studied to be a P.E. Teacher. After graduation she spent eight happy years (1981-1989) as a P.E. teacher for all ages at a government school.

From an early age Tharani loved baking and making cakes. She was very active in sports and volunteering. She would volunteer at the local YMCA with youth up until her marriage. She was very good at playing carrom, bridge, and cricket! She was one of the first women to be on the Hyderabad cricket team; she was even an opening batter!

Tharani loved the Lord; she often told her daughters He was the one that helped her the most when her mother died. She relied on Him for everything from waking up on time to finances. She was in love with her Maker ever since she was a child.

In 1985, on January 2nd, she married Hamilton Nirmal Kumar. They met a few years prior through friends. Their wedding ceremony was held at Centenary Methodist English Church in Hyderabad. Soon after, they moved to Malakpet, where they lived until moving to the United States.

She started work in Chicago as soon as she landed in America and later moved to the suburb of Addison, IL. It was here that she and Nirmal began their family. She loved her children very much and spent every moment she could with them. After the birth of her third daughter the family moved to Hanover Park where they lived for 10 years. Tharani worked multiple jobs and often invited people to her home. She would host parties, cook, and feed people to the brim. She loved taking care of people and showing them hospitality.

To provide a safer environment for their children, Tharani and Nirmal moved to Belvidere, IL in 2007. There they owned and operated a small donut and coffee shop. They were well known in their community. Unfortunately, all too soon after starting the business, Nirmal had health problems and passed in 2010 due to complications. Tharani was heartbroken. Even through her own heartbreak, she continued to fight to provide for her family and give them stability through faith. She overcame many hurdles in the past nine years since her beloved husband’s passing.

The Kumar family had begun attending City First Church just prior to the loss of Nirmal, and here they grew a community of love around them. Mama Kumar was known for her love, gentleness and teaching.  She had one other love in her life during this time, her little dog Khwaab. They were practically inseparable, and it was with deep heartache that she said goodbye for now to this little companion on December 13, 2007. In her later years Tharani loved to paint, draw, sew, cook and quilt. She spent her time with her daughters, loved talking on the phone with her siblings and close friends.

This past week, nine years after her husband’s passing, Tharani was on vacation with all her girls for the first time in a decade. While in the mountains of Colorado, the affect of the high altitude proved to be too much for her earthly heart. The girls rushed her to the hospital, where she was diagnosed with Acute Coronary Heart Disease and five arterial blockages were discovered. Her heart couldn’t handle the damage caused by the altitude and she did not survive. She returned to the Lord September 21, 2019. Her daughters, Rebekah, Esther and Sarah, continue to carry her love and memory. Her legacy will continue on through the lives that she has touched.

Funeral service will be at 1:00pm with a Visitation from 11:00am until the time of service on Thursday, September 26, 2019 in City First Chapel Building, 5770 Spring Creek Road, Rockford, IL 61114.  Burial in Shattuck Grove Cemetery, Belvidere.

To send flowers to the family or plant a tree in memory of Thatapudi Tharani Kumari, please visit our floral store.