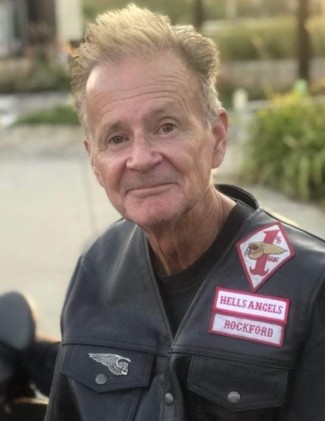 Neal "The Real Deal" Resendez, 70, surrounded by his family, made his final ride into the gates of heaven on March 12, 2019. Neal LaMont Resendez was born to Josephine (Graham) and Philip Resendez on September, 27, 1948 in San Bernardino, CA.  Neal lived life to the fullest and lived in numerous places.  He loved to travel and see new places.  He never met a stranger and to know Neal was to be loved.  He ended up settling down in Belvidere, IL where he married the love of his life, Katie Garrigan on November 23, 1974.  He had an amazing work ethic and worked at Liebovich Steel for most of his work life.  He loved to stay busy and would tinker on anything with an engine.  Neal was passionate about everything he did. He coached softball for years and was a huge Belvidere Buc football fan.  He loved all high school sports and was a lifelong supporter and eventually became a member of the Hells Angels Motorcycle Club.

One of his greatest accomplishments was being a father and grandfather.  AKA Papo, he is survived by his children, Maria (Randy) Yanez and her daughter, Sara (Kevin) Montoya; Paul Resendez; Kealy (Josh) Sheean and their daughter, Jaycie; Kelsey Peterson and her daughter, Olivia.  Neal is also survived and loved by his wife, Katie; brother, Steve (Mila) Resendez; sister, Janice (Dick) Kane; and numerous nieces and nephews. He is proceeded in death by his mother, father and brother, Phil (Linda) Resendez.
Celebration of Life will be held at 4:00pm on Saturday, March 30, 2019 with a Visitation from 12:00pm to 4:00pm in Honquest Family Funeral Home with Crematory-Mulford Chapel, 4311 N. Mulford Road, Loves Park 61111. The family requests casual dress and possibly wear red and white as they were Neal's favorite colors.

To send flowers to the family or plant a tree in memory of Neal L. Resendez, please visit our floral store.