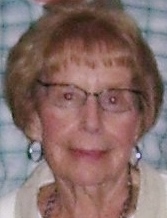 Eleanor "Nora" Finnell, 91, of Roscoe, passed away Wednesday, June 26, 2019 at Agrace Hospice in Madison, WI. She was born May 6, 1928 in Chicago, IL explaining how she became a long-time Chicago Bears fan. Nora spent her childhood in Whitewater, WI and later moved to Beloit, WI after marrying Robert Polzin. In 1976, she married William Finnell and became a resident of Roscoe, IL for the remainder of her life.

Nora enjoyed a full life and was full of life to the very end. When she was younger, Nora enjoyed playing golf and that pastime was replaced later in her life by the Red Hat Society. Nora was a staunch supporter of the Humane Society. She was a loyal viewer of CNN and was always keenly aware of what was going on in the world. Nora had both a warm heart and sweet tooth for cookies and cheesecake. She adored her cats. Nora enjoyed sipping her coffee in the morning and her glass of wine in the afternoon.

She will be missed by her family, card-playing friends and caring neighbors.

A memorial service will be held on Saturday, August 10, 2019 at 11:00 a.m. in First Congregational Community Church of Roscoe, 10780 3rd St., Roscoe, Illinois 61073 with visitation from 10:00 a.m. until time of service. Inurnment will take place at Roscoe Cemetery following the service. Memorial contributions can be made to Agrace Hospice and Palliative Care of Madison, Wisconsin or PAWS Humane Society of Rockford, IL.

To send flowers to the family or plant a tree in memory of Eleanor "Nora" Finnell, please visit our floral store.