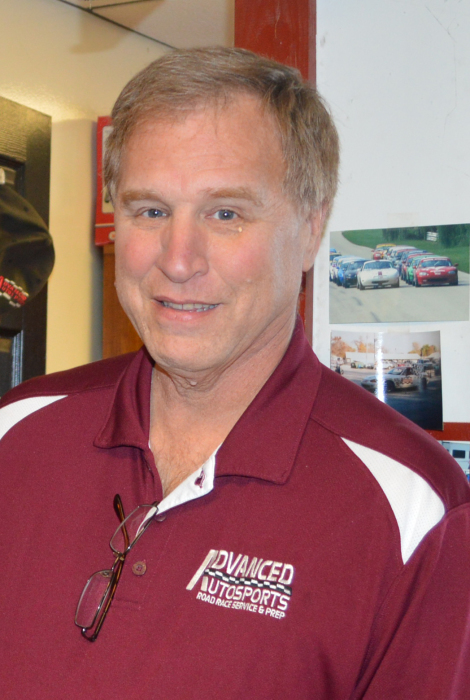 David Wheeler, 58, of Roscoe, passed away peacefully on Wednesday, December 12, 2018.  Dave spent his last moments surrounded by family and friends. He was a man loved by so many.  He was a husband, father, son, brother, papa, boss, crew chief, friend, and mentor. He was taken too soon at age 58 after a second occurrence of cancer.  Dave’s life was full of passion for auto racing, his business, and his family.

Dave’s love for cars began at a young age that turned into a serious hobby and quickly spiraled into Advanced Autosports.  He would constantly tell customers on the phone that he has been doing the same thing since he was 8 years old: “Playing with toy cars.”

Dave always felt a strong responsibility to take care of others and in particular, his four daughters.  He met the love of his life, Ann Mary O’Malley, in 2007. Ann quickly became a pivotal member of the Advanced Autosports family.  She and Dave settled together in Roscoe, IL in 2010 and were married in 2014. Ann passed in February of 2018 after fighting a rare brain tumor.  Their love may have been only a small part of a lifetime, but it brought two families together that are now inseparable. Dave and Ann are now enjoying their ride together in the heavens.

Dave was born on October 24, 1960 in Park Ridge, IL.  He grew up in Arlington Heights, IL and graduated from Arlington High School in 1978.  His first job was working at Leon’s gas station in Arlington Heights. Dave then owned a MAC Tools franchise.  He welcomed daughter Michelle in 1982 and daughter Susan in 1985. Michelle remembers Dave running over her bike with the MAC tool truck and Susie remembers rolling sockets out of the back door while Dave was doing inventory.  Dave started his racing career in 1988 while working part-time for a local Pro Formula Atlantic team. Following a two year stint with a multi-car Formula Ford team, Dave decided to try driving himself. In 1991, he purchased his first “race car,” a Mercury Capri. Subsequently, the Capri was replaced by a 1981 Ford Mustang Notchback, which was campaigned locally from 1993 to 2001. Multiple race wins and championships followed.

The part-time jobs quickly began to take over Dave’s time.  Dave quit his regular job as a manager at Goodyear and started Advanced Autosports in 1999.

The 2000 Rolex season saw Bruce and the Orion Motorsports team competing in the Grand American Sports car series. Competing in the AGT class the team earned two pole positions and numerous podium finishes. The team continued in Grand-Am during 2001, a partial schedule allowed for only two races with the DuPont Teflon sponsorship.

In the fall of 2000, a proposal was brought to Midwestern Council of Sports Car Clubs for a Spec Miata (SM) class. Dave was hooked on Spec Miata and became one of the early adopters and class champions. Dave's first Spec Miata race car was built in April 2001.  During the final race of the 2001 season at BFR, Dave set the Spec Miata track record, which stood for over a year. Spec Miata has grown to the largest racing class in the country with over 3,000 racers. Advanced Autosports has been part of the success of this class for the last 20 years!

Over the years Dave has worked on everything from IT (Improved Touring), IRL, Formula Ford, Trans AM, and Ferrari challenge cars. He has supported race teams from the local short tracks to Road America, Mid-Ohio and the high banks of Daytona.

Countless people have contributed to the success of Dave’s business over the last 20 years.  Dave always approached his business as a family business. He wanted his children, grandchildren, customers, employees, and other racers to feel like they were part of his family.  He often said, “remember, racing is supposed to be fun.”

To send flowers to the family or plant a tree in memory of David Wheeler, please visit our floral store.