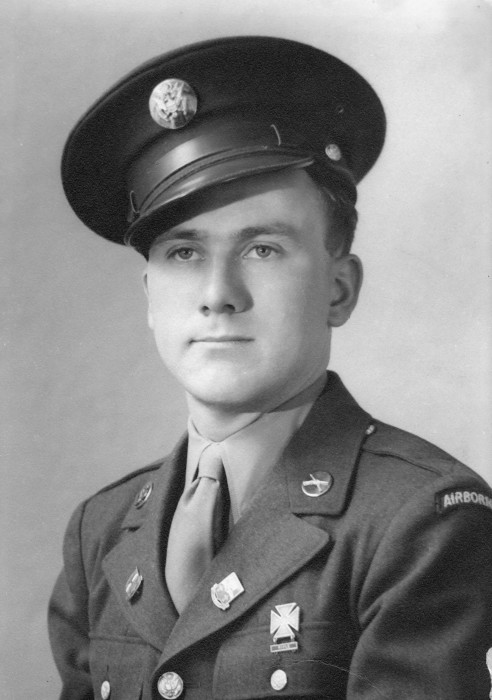 Bjarne J. Jacobsen, of Belvidere, died peacefully on Wednesday, January 1, 2020 at home.  He was born April 5, 1921 in Stavanger, Norway son of Bernt O. Jacobsen and Severine (Johannssen) Jacobsen. Came to the USA in 1928; educated in the US and was a competitive skier and soccer player.  During WWII served in the US Army.  Initially was in the 82nd Airborne Div., and then volunteered for the 99th Infantry Battalion (Separate) comprised of Norwegian Americans and Norwegian nationals. The special operation unit was trained as mountain ski troops that served in the European Theater of Battle. Their first mission was with the Provisional Ranger Group in Normandy, and they assisted in the surrender of the fortress port of Cherbourg. The 99th along with two separate Ranger Battalions were the American First Army's special forces and were assigned to other commands as needs dictated. In late January of 1945 the 99th, the First Special Service Force or Devils Brigade, and the surviving members of Darby's Rangers were joined to form the 474th Infantry Regiment that the Green Berets consider to be their origin.

Bjarne was finally convinced by his best friend and his girl friend to accompany them with the girl friend's new roommate Mary, a Belvidere girl. It was before WWII and they went to Rainbow Gardens and danced up a storm to the music of the likes of Larry Welk. After WWII he married Mary Rita Ryan in Rockford, on July 4, 1946, and was a wonderful beloved husband and father to 6 children.  Besides having a wonderful home, as a skilled carpenter he crafted many fine homes in the Rockford area during the day and retired from J L Clark's night shift after a long career as a machinist. He also created and operated Trimble Run Orchard. A generous gentleman to all, he loved hosting big 4th of July picnics and all aspects of Christmas. He golfed for fun in the outdoors and time with friends and family. On Saturdays they would push back the furniture in front of the TV and dance to the music on the Lawrence Welk TV show.

Bjarne suffered PTSD, and now the lingering effects of war have ended.  If preferred, instead of flowers donations can be made to the DAV, www.dav.org or the 99th Inf. Battalion Educational Foundation, www.99battalion.org.

To send flowers to the family or plant a tree in memory of Bjarne J. Jacobsen, please visit our floral store.